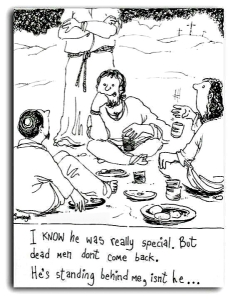 Some of us are blessed with an immediate and unshakable faith, others need more help and guidance to find their way.
The play is based on the story of Doubting Thomas. The story of an apostle, someone who had followed and heard Jesus for some time, needing proof to believe in The Resurrection is something that would relate to many of us.

We all have doubts. We all, eventually, have to take some sort of leap of faith on our journey with Christ.

In 2018 the play was performed six times by Christian Voices.  The play was written and directed by Alan Young and the songs written by Dave Chamberlin.

A big thank you to Dick Kempson who stepped in at the last moment when a player was taken ill.

The production was performed at:

Donations were received in aid of Poor Clares Convent, Lynton. Alan Young’s sister was a nun at the Franciscan order until her tragic death last October.

“Jesus is behind me” cartoon reproduced with permission, © Chris Bambrough, http://www.chrisbambrough.co.uk/