Our second play follows the Old Testament story of Ruth and her mother-in-law Naomi. 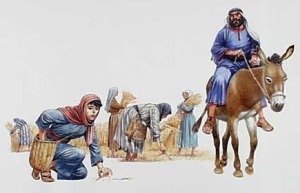 After both her husband and father-in-law die, Ruth stays loyal to her mother-in law but what will life bring her? She needs a husband to claim the lands of her father-in-law, brother-in-law and husband.

With an uncertain future the two women, who are emigrants, travel back to Naomi’s homeland, Bethlehem.

For your reference: The Book of Ruth

The cast and production team of the 2009 performances can be found here.

The production was performed:

The Heart of Gold – Programme and the original script are available for viewing or download.

This site uses Akismet to reduce spam. Learn how your comment data is processed.